Many years later... I bring to you, Season 10. This was the peak of my GMing pre-SSQ^2. It's still flawed, and hardly 'perfect', but it's about as good as old me gets. It's also one HECK of a long thing, so it's going to take a bit of doing to, uh, finish commentating on. Still, I'll try my best, even though it has been a bit since I commentated a season/cycle...

This is, of course, one of the last mainstream SSQ seasons. The one after it was the end of the 'original' SSQ style, and the ones before it were a bit short...

Hey there. I've placed the Plot Summary in its own page over here.

...What. You're still reading this? Well. I hope you skipped down here. (Editor's note: Until I edited this, you had to read a huge block of text to get to this paragraph.) That summary was one of the longest ones I made (possibly ever made), taking multiple days and more. So let's boil it down even further, so sane people can understand. Sure, I'll lose a lot of details, but, this is just some old season... a decent one, but not the best thing ever.

Metal Man sent the Questers to Genetia to clean stuff up, but made a horrible mistake by not having them be led by anyone, so they killed the wrong people. The bad guys (Ricky's goons) took over Genetia until the Questers had an angst-based BSOD and eventually figured out how to get help and defeat Ricky once and for all. Then they uncovered Genetia's own home-grown villain, Dark Force, whom they also had to kill because he was apparently bent on keeping Genetia a gigantic wasteland forever.

The Season... well, it was good. The plot, that is. It got a little too complex at times, and in others it became a bit too slow, but it worked out in the end. I'd dare say this was one of my few good SSQ 1 seasons, post-Season 6. Now that's not a high bar to hit, but what was really tricky was how this season had CONTINUITY.

Look at Seasons 11-13. They can't hold their *bleep* together for more than a few sessions before becoming completely off-tangent. Meanwhile, Season 10 stays on course, occasionally taking a detour, but never falling apart. For that, and the way it beats the Questers over the head for being stupid psycho-killing maniacs, I have to give it props.

But the Questers in this season sucked. Well, not all of them. But here's a short list of the worst ones. There were others who contributed, but... I'm going to be nice and only list the most annoying ones.

Aetos: Annoying idiot. He should have been banned, or killed, or something. He added nothing but annoying stupidity to the plot. He, as another person said, basically didn't care about what was the smart thing t odo, and instead did the stupid thing in order to annoy/insult everyone else. Horrible. 10/10 on the suckiness scale.

Maester Magellean: Story-derailing jerk. Had no place in this season. His side-world antics were nothing short of godmodding cheapness. Of course, now I know things I didn't back then, but that's no excuse for the player not having cooperated with the story. A very annoying, but thankfully off-to-the-side person. Still, I can never forgive him for the child-killing. Even if it wasn't entirely Magellean's fault ICly, the player should have known better than to put that in SSQ. Not cool. 7/10 on the suckiness scale.

Glyph: Secondary Story-derailing jerk. I inserted him in without vetting his backstory, so he pulled a classic switcheroo and gave me a villain where I wanted a helper. Then he kept derailing the missions in favor of his own. Ironically, despite being second banana next to his Maestery PlotDeraileryness, he managed to cause far more damage by continually messing things up. The fact he would continue doing so into the next season is only more salt on the wound. 9/10 on the suckiness scale.

Bonecrusher: Idiotic murderer masquerading as a Quester. He wasn't a Quester. He didn't follow their rules. He had no IQ. His player came back, years later, just to apologize for how stupidly annoying this character was. This character also claimed to be related to Daisy due to some ungodly backstory that's not worth glorifying in print. The only saving grace is he had no godmoddy life powers and rarely got a chance to derail anything. 4/10 on the suckiness scale.

Alex Hunter: Tertiary Story-derailing jerk. He was inserted in when Aetos was getting too dumb for anyone to tolerate. But since he had the same player as Aetos, he had to insist he was related to Aribar and Alexia, making him the most obnoxious and stupid way to try and force a shipping couple on an RPG I have ever seen. He also had no common sense, just like Aetos. 7/10 on the suckiness scale.

Julian Sawyer: Organized Crime Mob Boss masquerading as a Quester. He wasn't a Quester either. He didn't really seem to get that beating up other Questers was not how Questerly problems were solved. Killing was the only way that worked, short of de-initiating and 'banning' them. Beating them up just made them act MORE annoying. He also spent most of his time making shady deals with other criminals and caring only about himself. When it came to the Stadium or the Seeker, he didn't give a *Bleep*. He just looked out for number one: himself. He wasn't stupid, but his neverending violence and unQuesterly 'screw this planet' behavior places him as an ideal candidate to round out this list. 5/10 on the suckiness scale.

These people, and some others who were less annoying/appeared less, basically existed to annoy whoever was around them. They had their own self-centered plots, and they didn't care much about the ACTUAL plot of the season. I don't ask for much, but, these people were cold-blooded plot derailers, who worked more for themselves and the plots their players made up than anything to do with SSQ. Now, it has been 3ish years, so I don't really hold a grudge against them now, but I have to say--don't play in SSQ or my subsequent RPGs if you want to play plot-ignoring a-holes. It's boring, both in the logs and to have to GM for in-person.

So, anyway, down to the themes of this Season. There were a number of those, but they were simple. First, 'The Questers aren't always right.' Genetia wasn't Nintendus--and the Questers were foolish to think their ideas were always correct anyway. Next, 'Violence doesn't solve everything.' This is SSQ, so it does solve a lot--but thinking with one's fists doesn't fix issues that involve misunderstandings, distrust, or ignorance. Then there's 'Metal Man isn't as good as he says he is.' Basically, Metal Man as a leader was crummy. He made these poorly done plans and sent other people off to die for his mistakes. Too bad nobody caught on to it...

And a few others. 'Petty grudges are stupid.' Duh, hating people over what happened millions of years ago is bad--and so is declaring anyone who disagrees with you worthy of death, and so on. And also, 'Shiny artifacts aren't always good.' A good one, as earlier they had been represented as solving everyone's problems. Not interesting in the least. This was a nice change. There's more, but if you spent all your time reading this, you should understand them by now. They're simple.

It's funny what a little continuity can do for quality. The season after this one started out with the same stuff this one ended with, but you can see me spitting nails at Season 11's wackiness, while Season 10 is just cool with me. Ahhh... if only ALL of SSQ could have been so filled with continuity as Season 10...

Word Map (Made by Wordle) 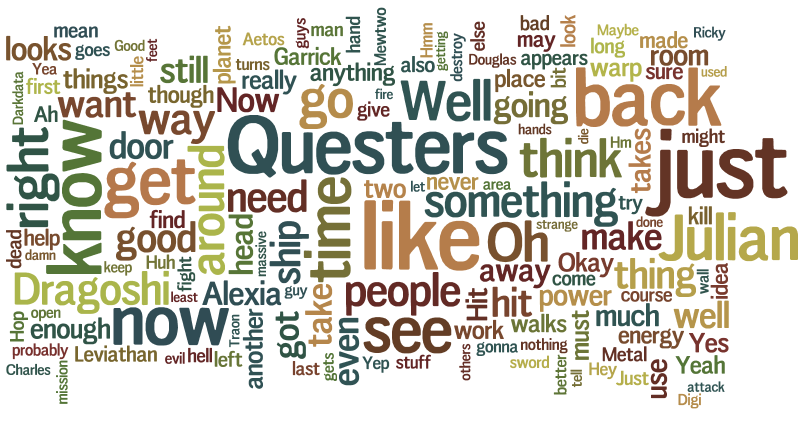 This is another big'un. Let's see. Julian's big on this map--even though he was 'ill' for large portions of SSQ Season 10. There's a smaller Dragoshi in the corner--he didn't become the session-maniac until later on. I like that corner--it shows the connected threads of Charles, Hop/Leviathan (parts of Glyph), hell, and evil.

Garrick, Mewtwo, and... a hand? pop up as well. They were the only sane men, so naturally they almost never popped up in sessions past the early part. A shame. Ricky's another big one, since he was the main villain most of the time. Ships, power, Metal Man... Darkdata, just, right, warp... planet, Aetos, Hands... basically it's a season about space ships, energy, warping, and a handful of frequently appearing villains/heroes butting heads. Pretty simple, for one of these, really.

Cast (In order of Appearance)

I'm using my magical cast-finding PHP device. I may not get everyone as neatly as before, but... this season is monstrously huge. I'm not THAT obsessed.

Jude - Genetian Advisor - Hey, Whoever This Guy Is

VCR - Opposite World Being - Kinda like VG, but more Recording Involved

Contract - The Man's Contract - Gonna Tie You Down, Make You Weaker

Well, that wasn't too hard. It just took multiple days to summarize this MASSIVE season. I hope you at least partially read/enjoyed this, but even if you didn't, it'll be nifty reference material for me to have.

Also, no offense to those people's players whose characters I slammed. They just sucked in this season, seriously. Everyone has their ups and downs, and this was a horrid season as far as player character quality was concerned. Hopefully nothing like that will happen again, especially not when I'm actually GMing properly.

Anyway, that's it, see you next commentary/log!